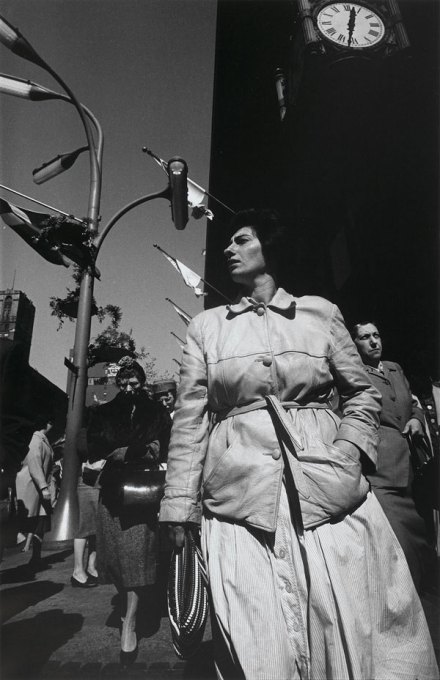 When I was ‘young in photography’ this Callahan photograph made a deep impression on me. A monumental figure like a statue is plucked out of an everyday moment on a footpath. The ominous clock ticking away, its hand pointing at the woman, a de Chirico in Chicago.

What are the odds against finding its sister image made only a year or two before? The Robert Wise movie Odds Against Tomorrow was made in 1959 and has a brief shot of people walking past a bank – soon to be robbed – and a woman walking under a clock.

There is no connection between the two images, it’s just something I noticed, but curiously, the movie does have some of the fateful quality of the photograph. It’s about the racial bigotry which leads to the doom of its two main characters. A very visual film, the cinematography is so refined and beautiful it relates to Callahan’s still photography aesthetic. I did some posts on the movie which you can find at Odds Against Tomorrow 1, 2 and 3