The most important drawing in the history of photography!

In 1833 Henry Fox Talbot was on his honeymoon at Lake Como in Italy. One day he was trying to draw the landscape from the grounds of the Villa Melzi using a camera lucida, an artist’s device for focussing a view onto paper. His attempt, as you can see above, was awkward, and it …

“… led me to reflect on the inimitable beauty of the pictures of nature’s painting which the glass lens of the Camera throws upon the paper in its focus; fairy pictures, creations of a moment, and destined as rapidly to fade away.

It was during these thoughts that the idea occurred to me how charming it would be if it were possible to cause these natural images to imprint themselves durably, and remain fixed upon the paper!”

Talbot returned to England and began experimenting with silver salts and within two years had made his first photographs. 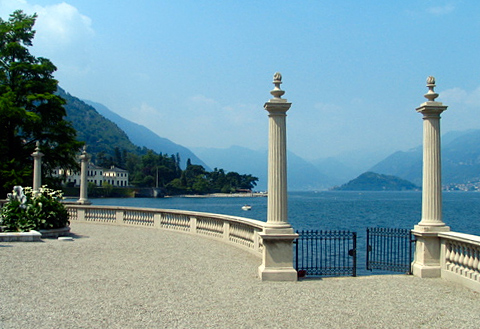 The Villa Melzi is still there, and seemingly unchanged in 179 years. Just past that third lion statue Fox Talbot sat and made his drawing which led him to invent photography! Villa Melzi is a hotel so it must be possible to stay there and sit in the same spot that gave birth to the medium of photography.

Google Earth view of Lake Como and the Villa Melzi.