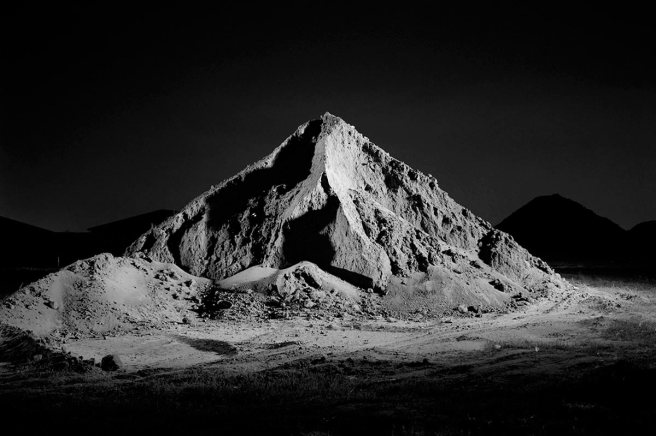 Andrew Curtis has a new exhibition called Moonlight Mile, at Blockprojects. The exhibition is a series of large black & white prints of earthworks shot at night on building sites.

Although they are pigment prints (they were made by Les Walkling), the capture itself was on 5×4 film. Andrew has a significant body of work of night photography on industrial subjects all shot in this way, you can see them on his website. They completely avoid the sort of triumphalist rhetoric of Wolfgang Sievers’ work, but they consciously share the magical properties of painted light and nocturnal encounters of the great man’s work.

The work functions on different levels: as gothic landscapes and as typological indexes of earth forms, for example. In the catalogue essay Sean Payne refers to the work’s affinities to the Becher’s typologies and to New Topographics scrutiny of suburban forms in the 1970s.

There’s a quality in Andrew’s work that I always admire – his sense of wonder at what he depicts. The gallery has a black-framed piece in the stockroom. The heavy black border weighs down the solemn image and gives it an almost religious gravitas.