Photo from The Australian newspaper, May 8, 2013

Last Wednesday The Australian newspaper featured a photo of me with my associate James McArdle. The occasion was the release of a Pozible.com crowd-funding site for our Mark Strizic project.

James and I are paying hommage to the great Melbourne photographer through an app that would enable interested people to locate the exact position in a Strizic photo, say of a site in Melbourne’s CBD. This will assist them in taking a photo of modern day Melbourne from the same camera position.

The Pozible site is to gain funding for the design of the app by a software designer. It’s called Retake Melbourne.

The photographs we are holding up are before and after shots of the Bourke Street Mall taken from the GPO. Mark Strizic photographed it in 1955 with the old man in hat and the great commercial building beyond. My photo was taken from the exact camera position, and (almost) exact lens focal length. The comparison indicates the change in architecture in people and in the general mood of the city. That is the spirit of the app. 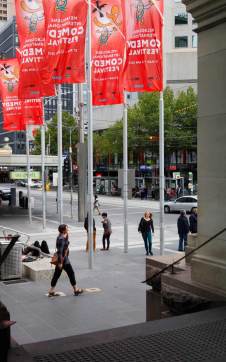 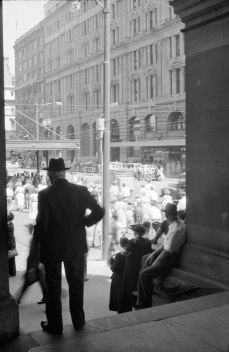