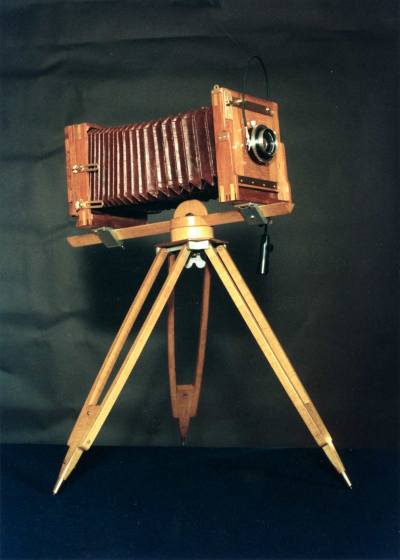 In the year before he died, Wolfgang Sievers donated a camera to my college, NMIT. The camera is a Stegemann Studien-Kamera-C, a 9×12 monorail originally designed by the great Pictorialist photographer Heinrich Kuhn.

The model C started manufacture in 1927 and this one was purchased by Wolfgang in 1937, as you can see from the receipt. The average weekly wage in Germany was 32 marks so this camera cost nine weeks wages. By comparison you can buy a Leica for that today. It came with a case, stand, lenses and film holders – see the photos below.

Stegemann was an important camera manufacturer in Germany and apparently survived the war for a few years. Wolfgang told me he had it manufactured in Berlin, then brought it to Australia in 1938. Unfortunately the 9×12 format was not common here so the camera wasn’t useful. I am not sure if that is the whole story. 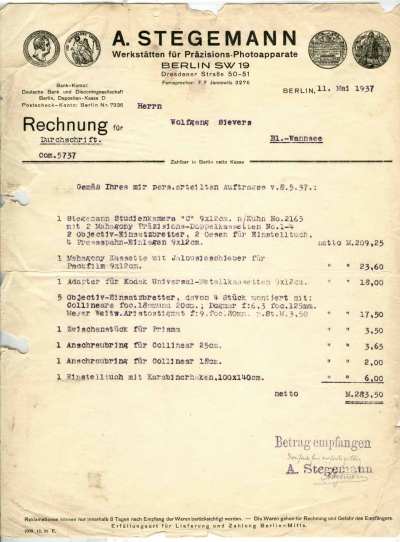 The camera is a relic of old German craftsmanship, it’s a beautiful handmade object. The best parts are very impressive, exquisite mahogany and brass materials, intricate design, tight tolerances in many places.

On the other hand it is a pre- World War 2 design, it has poor useability. The ground glass is dim and difficult to compose with or to focus. The focusing itself is very clumsy. The camera is awkward to assemble and does not function smoothly like postwar monorails.

Despite that it’s a compelling experience to use. It takes you into an older realm of photography. Heinrich Kuhn’s basic design is 100 years old – you’re using something from the age of Pictorialism! And this was Wolfgang Sievers’ own camera, and he used it in Berlin during the Nazi period! 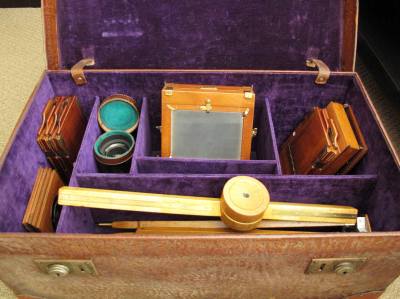