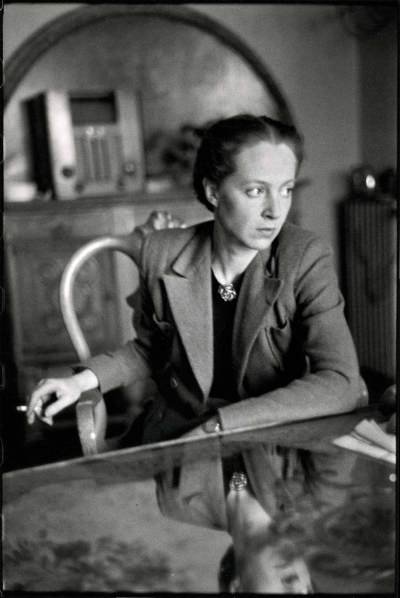 Henri Cartier-Bresson is renowned for his brilliant compositions and for his lightning reflexes. No photographer could match him in the elegant designs of his photographs which were made in the fleeting moments of his photojournalist encounters. I’m sure some of what is written about him is myth-making but it is undeniable that his photographs were very well composed.

Take this impressive portrait made just as the war was ending. Both HCB and his subject were war heroes, and the photograph is the meeting of equals. He had served as a soldier, was captured and escaped three times from a German prison camp and had then worked in the Resistance.

The subject of his portrait, Vaillant-Couturier, had an extraordinary twentieth century life. A photojournalist for VU in the 1930s, she became a Resistance fighter during the war, was captured and sent to a series of Nazi concentration camps including an 18 month term at Auschwitz. At the time the portrait was taken, she was becoming a member of the French parliament. Why are there no movies about her?

The composition of the portrait is a wonder. The oval of her face is linked to the arch behind her head, and it’s echoed in the loop of the white chair back. The rightangle of her arm draws a square with the triangle of her lapel, and it echoes the square radio in the background. These shapes counter the round shapes of the composition. The shape of her hand holding the cigarette offers a secondary focal point to her face. Her reflection on the glass table hints at another dimension to her personality. All the parts work together in a tight composition, but the picture itself does not feel tight. Instead, it holds her in balance, and somehow implies the balance of her own identity.

The portrayal is of a clear-eyed and self-determined individual, and that is what she was. She had a long career in left-wing politics as an MP and public intellectual, was a witness at the Nuremberg Trials, and was later made a Legion D’Honneur, Frances’s highest honour. You can see all that potentiality ahead of her in Cartier-Bresson’s sparkling portrait.