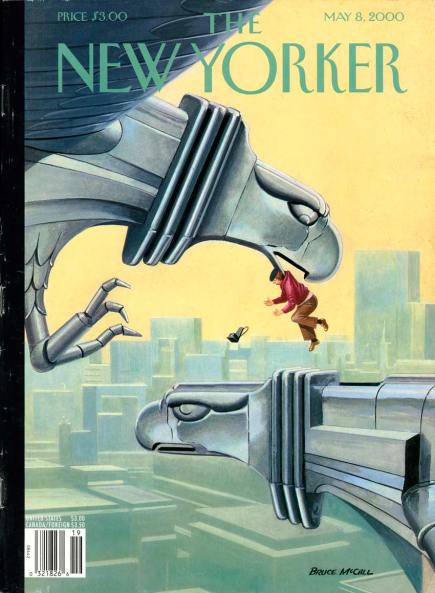 Do you recognise what this illustration refers to? Bruce McCall‘s cover for New Yorker magazine shows the gargoyles on the Chrysler Building coming to life and attacking a tiny human.

It’s based on a 1934 photograph of Margaret Bourke-White, the legendary photographer of the 1930s. She’s on one of the gargoyles 61 floors above Lexington Avenue, with her Graflex camera. Her assistant and collaborator Oscar Graubner took the photo, immortalizing her as an adventurer and free spirit.

One of the highest paid photographers in the world, Bourke-White was a celebrity and role model for her high energy images of the Machine Age. Two years later she shot the modern wonder of the age, the Hoover Dam, for the first cover of Life Magazine.

Her own studio was in the brand-new Chrysler, a symbol of technological progress, and one of the coolest address in New York. Previously the tallest building in the world with its sunburst tower in stainless steel, it was a poem to the Chrysler car, decorated with giant hub caps and those massive gargoyles which were modelled on the Chrysler car’s hood ornaments.