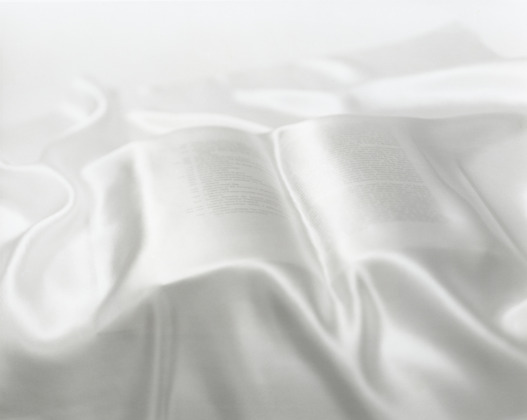 Look at this beautiful picture by Sarah Charlesworth, an open book half concealed under folds of white satin. What is the picture about?

Along with her colleagues in the Pictures Generation such as Cindy Sherman and Laurie Simmons, much of Charlesworth’s art was addressed to the political issues of the 1970s and 80s: gender politics, neo-Marxist ideas about capitalism, the ‘society of the spectacle‘, Baudrillardian ideas about simulacra, the ‘the death of the author‘. In short, French theory in the post-structural vein.

In her early life, Charlesworth was a declared Communist and even travelled to China to experience it firsthand. That tilt in her thinking, though modified, never left her so it’s natural to try to read this picture with all that mind.

Significantly, the image is titled Text. It was in the 1980s and 90s that the word ‘text’ began to take on a new and wider meaning, referring to any cultural product, a book, a film, a comic or a photograph. This notion took hold in schools during the period when TV shows replaced books in high school English classes. Thus the title Text may refer here to the book half-concealed beneath the satin – it is a book-text. Or it could refer to this photograph-text, one that happens to contain a representation of a book.

Charlesworth’s picture is a conundrum, it seems to exist in two dimensions. The sensuous white satin draped over the open book can refer to the seductiveness and pleasure of reading. But at the same time, does it refer to the proposal outlined above, the danger of being seduced by books?