Jane Graham is unmarried and pregnant when she is turned out of her comfortable suburban home by an angry father. She lights dejectedly on a bug-ridden room at the top of a squalid house in Fulham. She cares nothing for it, or herself, or her neighbours.

Lynne Reid Banks’ first novel, the L-Shaped Room, was a best-seller when it was published in 1960 and a movie was soon made starring Leslie Caron. Penguin Books published the first paperback edition in 1962 with a cover drawing by Terence Greer. A later edition featured a too-literal photograph. 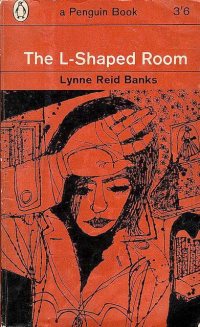 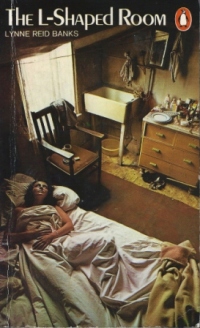 Designer Paul Murray has posted the Penguin template on his website which you can download and insert your own image and title into; you can pretend you’re a real Penguin designer from the 1960s. The cover layout is in the famous Marber grid, designed by Romek Marber for Penguin Books in 1961. Baby boomers will recognize it because Penguins dominated the paperback market in the postwar decades.

The image in my design is labelled Repaired Photograph and can be found on John Foster’s site at Design Observer. It’s clearly from about 1960, and shows a young woman of about the same age as the novel’s character Jane. The torn up portrait, clumsily repaired with sticky tape, suggests the character’s own journey in the novel, from despair to recovery.