Over the past three years I’ve shown my work on four occasions at Tacit gallery in Abbotsford: Face/Time, with Kirsten Perry, the group shows Folded and Momentary, and last year’s solo exhibition Gooog. On June 10 the sixth exhibition will go up, called Man in the Street.

You can see my page on the Tacit Contemporary Art website. 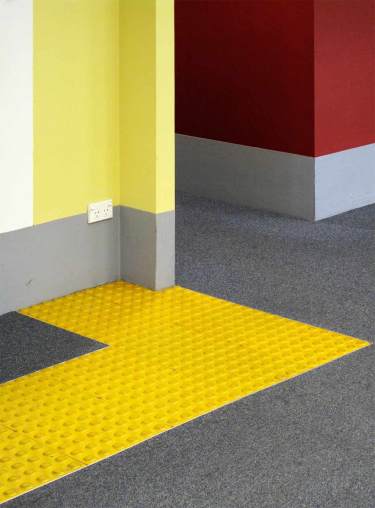 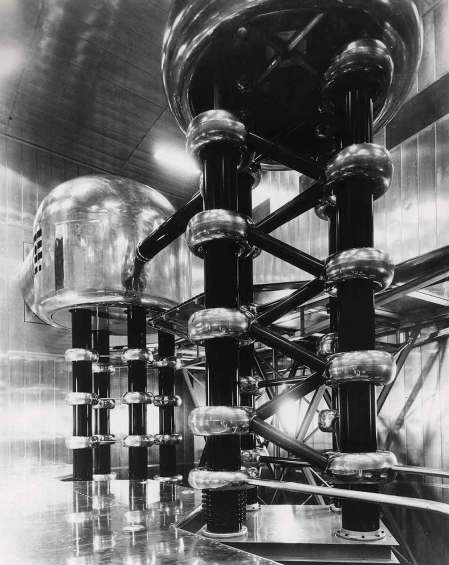 Gizmodo has an amazing set of photographs released by the US Atomic Energy Commission showing various science fictional machines use to create atomic power. The images date back several decades and evoke sci fi movies from the 1950s.

The structure above is called a Cockcroft—Walton generator, and it’s a circuit that was used to generate the high voltages needed for particle accelerators. Photographer Mark Kaletka has a good description of what’s happening here. “The legs are resistors (blue cylinders), capacitors (silver doughnuts) and diodes…The silver domes at the top get charged to 750,000 volts, which accelerates ionized hydrogen into the accelerator complex.”

To see the complete set of AEC photos, which include research into both military and peacetime applications of atomic energy, go to the AEC flickr page. 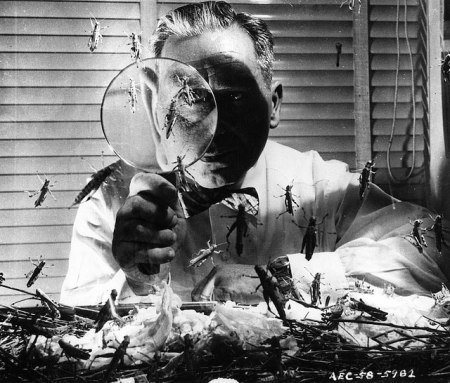 An employee inspects grasshoppers with a magnifying glass in 1958 — although      for what purpose is lost.

This intriguing image is a glass plate negative from around 1900.

It is a dry plate film, an invention that replaced wet plate photography from the 1870s on. Dry plate was an improvement of film technology that avoided the mess and labour involved in wet plate collodion photography. In that difficult process, sheets of glass were manually prepared in a darkroom immediately prior to taking    a photograph, and developed immediately after. Dry plate, like today’s films, was purchased ready to use, and could be processed at any time.

The active chemical in dry plate was still silver bromide but was now suspended in    a gelatin rather than collodion emulsion, thus avoiding the ‘wet’ preparation stage. Improvements to the gelatin emulsion through heating the mixture dramatically increased light-sensitivity (ISO) as you can see on the label below.

Dry plate film was manufactured from 1878 and was a revolution in photography because commercially manufactured film could be purchased as desired, used at any time and developed at any time. The standard support was a sheetof glass with the film emulsion already applied. Flexible cellulose film base took over in the early decades of the 20th century.

My glass plate negative has no brand on it so it’s anybodies guess who manufactured. It might have been Kodak, but there were numerous other brands of film available, like this one:

A document scan  picks up the surface detail of the negative.

Since the provenance of the negative is unknown, except that is was purchased in Gippsland, no camera can be guessed at; was it a commercial photographer or a family member behind that camera? The neat arrangement of figures suggests a commercial hand at work. 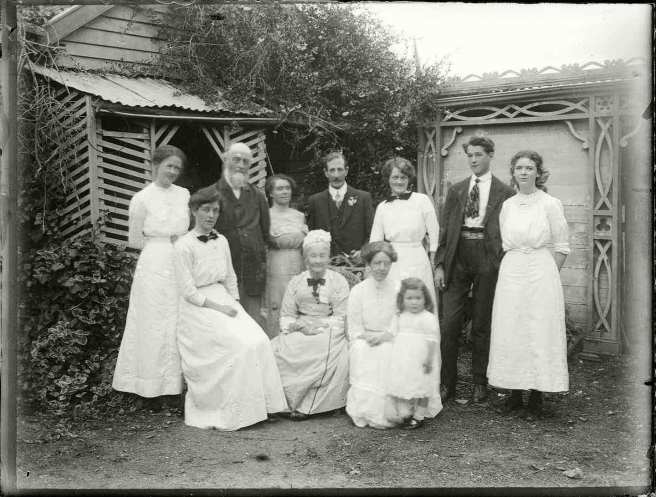 Positive image. Click on the image to see the faces and fashions more clearly

The positive image show it as a family group in Victorian or Edwardian dress; the young man’s suit and tie suggests the latter period. The family is grouped around the matriarch in white bonnet. Four generations are pictured, a notable occasion worthy of a formal photograph in those days of infant mortality and early death.

They seem neither wealthy nor poor, and the scene could have been in the country or the city. Their neat clothes contrast with the untidy architecture. It is notable that all the women wear white. Frustratingly, there are not enough firm clues to be certain about the photograph’s details. It’s full of stories, but you have to make them up yourself. 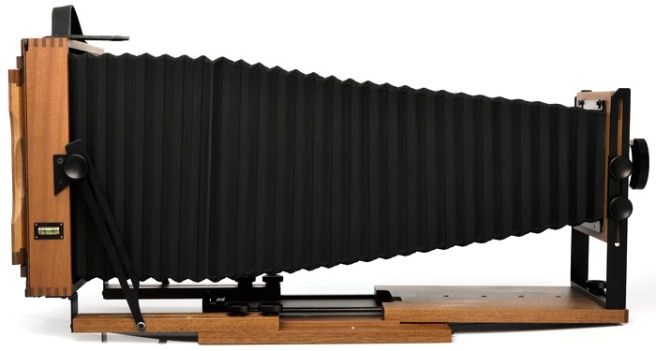 .
As the great camera manufacturers cut back or even close down their film camera production, there are opportunities in the market for small operations. One such is a partnership called Svedovsky, run by two carpenters in Poland. They make a 10×8 field camera plus a wide-angle variant of it, and that’s about the whole operation. It appears to be a very nice product.
Svedovsky 8×10 is my latest large format camera concept, created with a help of my associate Paweł Osiński. Together we have been managing a carpentry company for fifteen years in artistic carpentry.
I have been a photographer for a good part of my life. What I missed about many view cameras available on the market was stability of used materials. For this reason I have decided to create a real working horse, a camera durable enough to stand years of usage under changing conditions and in difficult photographic situations. Svedovsky 8×10 is designed using only the best materials.
////////

The website, at svedovsky.com, shows the camera in all its extensions and movements and reveals it as a beautifully crafted tool for the large format photographer. It’s made out of mahogany, titanium and steel and is built to last.
According to the review by Hubert Banaszkiewicz (admittedly on the Svedovsky website), the camera is fast to set up, stable in a wind, has a very clear focussing screen, and precise focussing.
The Svedovsky sells for US$1800, which will be roughly AU$2500 including GST. That’s without a lens, of course. 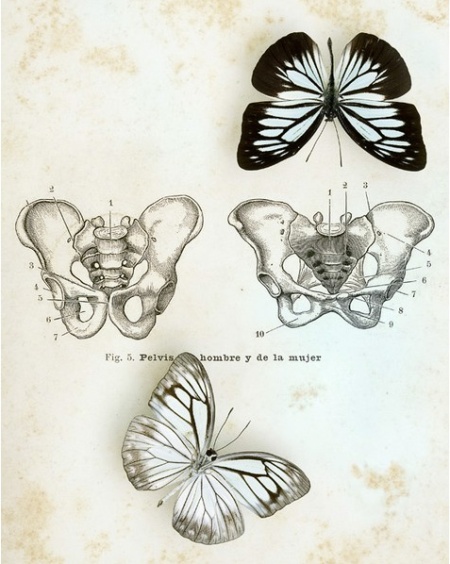 Jo Whaley has been making still lifes since the 1980s and her work has been widely published and exhibited. Her book The Theater of Insects came out in 2008 and contains many of her beautiful colour photographs.

The blurb states that she “… constructs mesmerizing scenes with vibrantly colored bugs that echo the tradition of natural history dioramas, but are artfully placed against weathered, man-made backgrounds. The result is a compelling marriage of natural and artificial, art and science.”

Pareronia Valeria (above) is a species of South Indian butterfly known as the Common Wanderer; it is a beautifully ‘designed’ creature. Whaley’s photograph shows a male and female arranged on top of a medical illustration labelled ‘pelvis of the man and the woman’. It shows the differences between the sexes and the resemblance between species.

Acrocinus longimanus is known as the harlequin beetle because of its elaborate coloured pattern on its back. It is native to Central and South America, although it seems to want the whole world with its absurdly long forelegs.

Phasmids are named from the Latin word ‘phasma’ meaning phantom or apparition. Since most of them camouflage themselves as sticks and leaves they seem able to disappear like ghosts. But this spectral quality is countered by their hard linear forms, echoed in the picture by the geometric diagrams.

Whaley talks about her practice in terms of theatricality; the still lifes are arranged with the same kind of detail as stage sets. The props, backgrounds, lighting and colour only come to life when every element is in place. She learnt this skill when she worked for the San Francisco Opera as a scenic artist, fresh out of art school where she majored in painting. In a way, she is still a painter and still a scenic artist.

“The difficulty with the still-life genre is that one has to animate the inanimate. My approach is to consider the still-life set as a theatrical stage, where the backdrops are fabricated and the objects are positioned to create a visual dialogue. In designing the set, I take my lead by considering the aesthetics that are apparent in the insects themselves.”

Greg Neville, Iconoclasm at the Convent, 2015

The 1864 portrait is of Julia Jackson, her niece and goddaughter; she photographed her about twenty times. Jackson became the mother of the painter Vanessa Bell and Virginia Woolf who wrote about her mother that she “bore about with her…the torch of her beauty; she carried it erect into any room that she entered.”

Cameron photographed Jackson in the Pre-Raphaelite style, pensive and ethereal. The Pre-Raphaelite group of mid-19th century English artists had romantic notions about women that influenced Victorian art and was a counter to the prevailing Academy Style of heroines and victims.

This showed itself in their preference for a certain type of female head. Over and over, their pictures of women show a long neck, a small cupid’s bow mouth, abundant reddish hair, a straight nose and that distinctive large jaw. Add to this a melancholic expression and you have almost a formula for the Pre-Raphaelite woman. These resemblances are on display in the exhibition through prints, drawings and paintings.

By coincidence, I happened to be reading a book by Virginia Woolf when I attended the exhibition, along with my students. Holding it up in front of Cameron’s portrait and the other pictures left us in no doubt about the Pre-Raphaelite physiognomy. And when you consider the date of George Beresford’s portrait on the cover, you can see that the influence of Pre-Raphaelite womanhood had lasted forty years, into the new century.

Virginia Woolf, Killing the Angel in the House, Penguin 1995

Fred Herzog is an 85 year old Canadian who’s having a late career spurt.

In 1953, after emigrating to Canada from postwar Germany, he started photographing the streets of Vancouver with Kodachrome film. Over the years he took 120,000 photographs. roughly 3,333 rolls of film. They were not widely seen because slide film was not easily or affordably printed and anyway he was not pursuing a career as a professional street photographer.

Now, with the combination of digital scanning and inkjet printing, his slides have found a new, public life in print and book form. Herzog’s long career as a photographer is being exhibited, written about, and published in a book. You can see what a sharp eye he had, patiently combing the streets for visual surprises and the obscure coincidences that only street photographers catch.

You can also see the special beauty of Kodachrome film and what a loss it is to the visual arts. 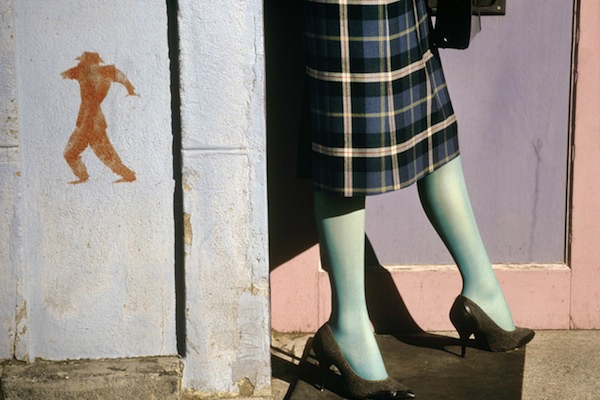 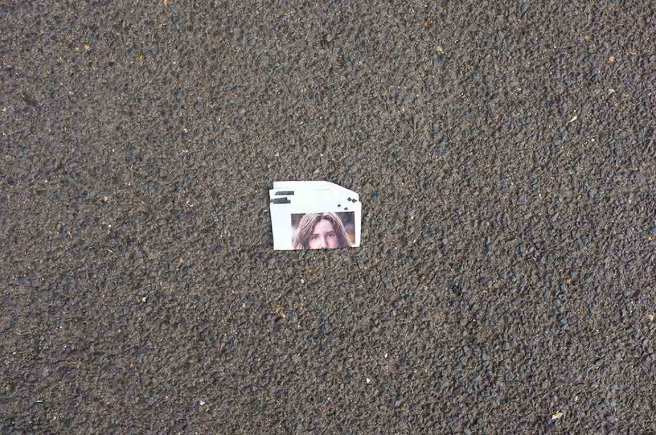 In the 1980s, it seemed that the still life genre had become the domain of women photographers such was the frequency and quality of their work. Artists such as Jan Groover had long careers carving out new subject matter and aesthetic strategies for the worn out genre.

Here are four still life photographers who flourished during and since the 1980s and whose styles have notable similarities. In these four typical examples their approach is the same, using 19th century family portraits and arranging props on them to create some resonance.

The strategy owes something to Surrealism, for example Max Ernst’s collages, but the exact meaning is hard to pin down. Since even Olivia Parker could not say what her pictures were about, I won’t try, and you speculate as you wish. But each arrangement seems fitting, coherent with its own miniature terms, a micro world of once living people, alive again briefly while you look at their faces. 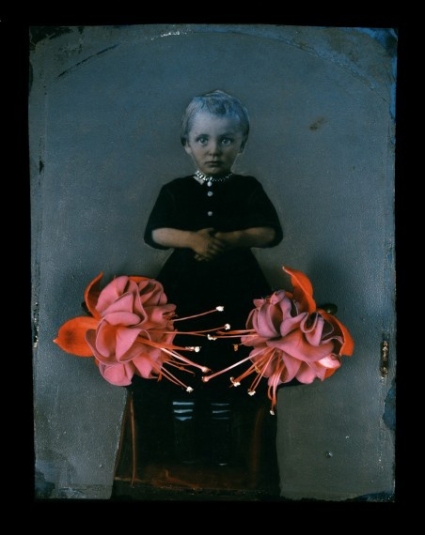 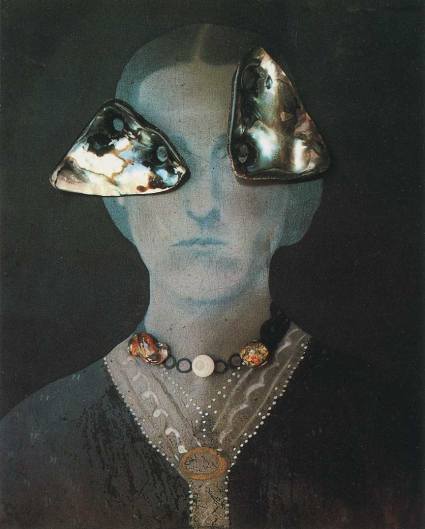