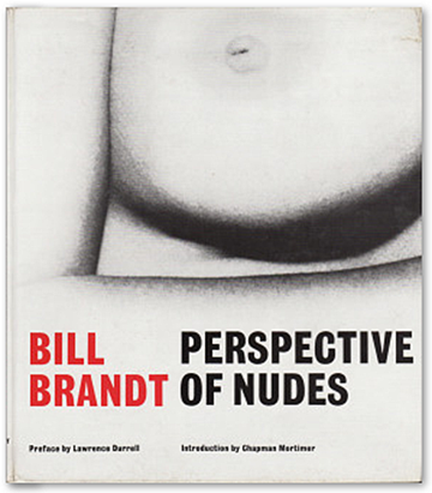 Perspective of Nudes by Bill Brandt, published in 1961

Bill Brandt”s 1961 Perspective of Nudes is a landmark photo book, rare today and fetching high prices on the vintage book market, one recently sold for $1200. It was finely printed in heliogravure, the oldest procedure for reproducing photographic images, and rare in publishing after the 1940s.

The Photobook: A History states that Brandt “rewrote the language of nude photography in not one, but several quarters … they are as interesting for their psychological undertones as for the wealth of unexpected forms he conjured.

Brandt acknowledged a debt to the wide angle, deep focus cinematography of Orson Welles’ Citizen Kane. His lenses stretch the figures into sculptural shapes, partlly abstract, and reminiscent of the contemporaneous sculptures of Jean Arp and Henry Moore.

“Instead of photographing what I saw, I photographed what the camera was seeing. I interfered very little, and the lens produced anatomical images and shapes which my eyes had never observed.”