It’s not surprising that Romain Jacquet-Lagreze is also a graphic artist – the flattened perspective of his Hong Kong photographs look two-dimensional, like graphic design.

In his project The Blue Moment he uses carefully chosen vantage points and apparently a long lens to compress the city of towers and give it a cut-out look, as though photographs have been sliced up and joined together. Some look like René Magritte’s visual puns, especially his 1965 painting The Blank Cheque.

To get the particular mood, Jacquet-Lagreze photographed his adopted city at dusk when the fading sky light washes the city in blue.

The Blue Moment is a photographic journey in the city of Hong Kong. Each day at the very last moment of dusk, the sky takes on a deep blue tinge which is then reflected onto everything that exists below. During this very brief moment that only last a minute or two a blue veil envelops Hong Kong and releases a mystical atmosphere. With the coming of the night, the city’s lights bring the touches of warm color illuminating the cityscape. (www.rjl-art.com) 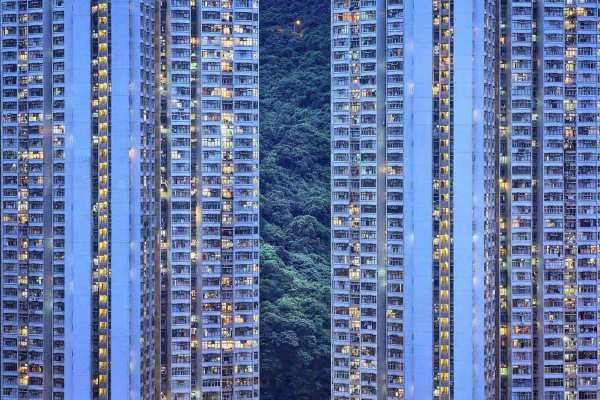