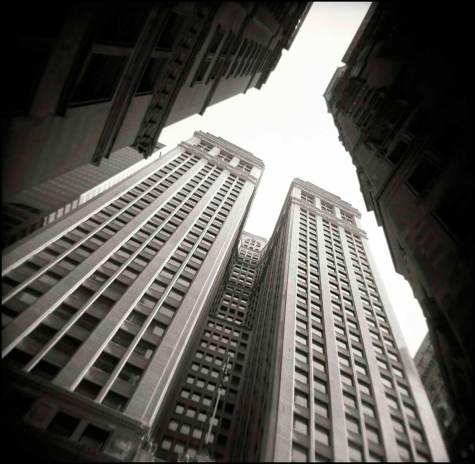 This photograph was taken in Manhattan, looking up at the once famous Equitable Building near Wall Street, opened in 1915. At 40 storeys it was a gigantic building for its day and it darkened the surrounding area.

A wave of protest followed and the next year zoning laws were introduced requiring new tower blocks to get narrower as they went higher, letting light reach the street below. They eventually gave us the typical stepped shape of Art Deco skyscrapers, such as The Empire State Building.

The photograph was taken from under the Trinity and US Realty buildings opposite in the part of Lower Broadway where ticker-tape parades were held.

The camera was a Holga, the medium-format plastic toy that has reportedly been discontinued. It’s simple lens distorts at the edges, as you can see in the lower right corner, but overall it’s a serious camera – the signature wide-angle square image has a particular softness that’s very appealing.

The photograph of the Equitable is an extension of my Vertigo project, a chronological series showing the rise and rise of New York buildings.

You can see my other work with the Holga in The Modern Idea, also on my website.