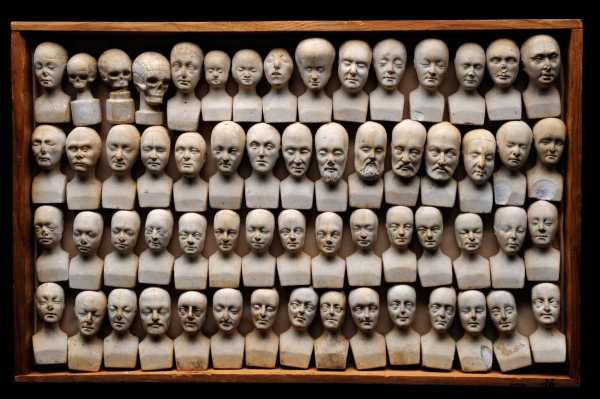 If you’re a portrait photographer, you might be interested in this. The Science Museum in London is showing this set of heads from 1831. It’s a kit to train practitioners of phrenology.

And what is Phrenology? It was a crank pseudo-science of the early 19th century that taught that the shape of the skull determined personality. Yes, you read that right, the bumps on your head decide what sort of person you are.

Phrenology originated with a German physician, Franz Joseph Gall, in 1796 and it took off all over the world. It became a sort of popular science and parlour game. People believed that different regions and functions of the brain would vary in size according to ability or disability. The shape of the skull adjacent to these regions would be effected and could be interpreted by an expert through feeling the skull. It was a map of identity. Early Daguerreotype photographers would have had this in mind when they took their portraits. Is there a PhD waiting for someone to research this connection?

As you can see, a variety of head-types are included in the kit. For example, head no.54 is a scientific man and head no.8 is an ‘idiot’. One description states that “when the forehead is perfectly perpendicular, from the hair to the eyebrows, it denotes an utter deficiency of understanding.”

Look closely at each head. Do you see yourself there?