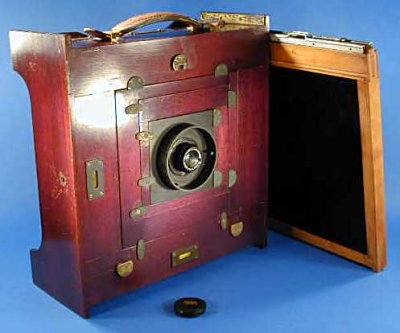 This odd-shaped camera has a famous story behind it. In the 1940s, Bill Brandt was tipped off by a friend about an interesting camera in a local antique shop in London. He bought it and subsequently used it for his project Perspective of Nudes which became a key book of 20th century photography. Vintage copies now sell for $1200.

What Brandt had bought was a rare Kodak Wide Angle Camera with Zeiss Protar Lens, used by police for recording crime scenes. The wide angle lens captured the whole scene while the small f45 aperture gave full depth-of-field. Essentially it was a fixed focus box camera allowing untrained coppers to get the shot on the generous full plate film. The lens was a Carl Zeiss Jena f18 Protar of 85mm focal length, giving a very wide 110 degree angle of view, equivalent to 15mm  lens on 35mm format.

These cameras are extremely rare, perhaps only made for the police force, but John Rushton’s website has one and you can see all the details. It is an original design, as the pictures show, with curious features such as the small “feet” on the back which allows you to lay it on the ground to shoot vertically up. 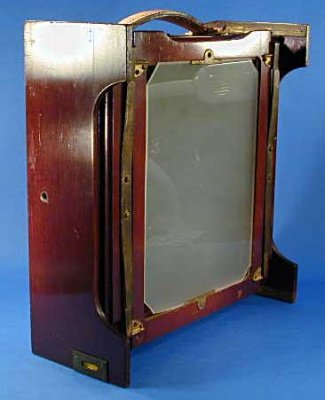 Bill Brandt was one of the greats and he did some of his greatest work on this camera. The well known 1945 portrait by Laelia Goehr shows him holding up the camera in front of his face; it must have been taken near the time of purchase and he clearly knew he had found a great new tool.