Very sad news that Edmund Pearce gallery is closing today. After three years, the directors Jason McQuoid and Tim Bruce have decided that Melbourne will not support a commercial gallery dedicated to fine photography. They gave it their best shot, Edmund Pearce is by a long way the best photography gallery that Melbourne has seen.

The closure will leave a big hole in the photography scene, and not just of Melbourne. Artists that have shown there have been from interstate and overseas, including the current show by the New Zealand artist Beckon, and notably by New York’s Phillip Toledano and Amy Stein.

I was privelaged to show twice at Edmund Pearce, this year with my exhibition Burn, and in 2013 with Chemistry of Chance, a collaboration with Greg Wayn. 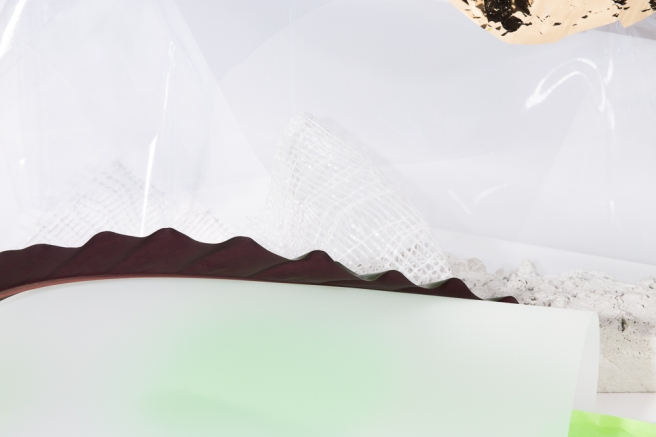 Edmund Pearce gallery has a strong exhibition of architectural photography, Facades, by Sydney photographer Tom Evangelidis. The main gallery has nine large framed photographs of building facades from around the world. There is also a handsome book for sale. The large framed images have a scale and weight that echoes the architecture itself.

As a photographer, Evangelidis is fascinated by the evolution of architecture and its intricate links with politics, culture and class. He approaches major public installations with the same respect as humble, ramshackle homes because he understands they are equally important in documenting the progression – and decline – of history.

This body of work was shot using traditional methods. Evangelidis uses a custom made wooden large format camera and only one single sheet of film per location.

My next exhibition is called Snapshot: Contemporary Photography, a group show at Carbon Black gallery in Prahran. The gallery is at 239 High St, just near Chapel St. It opens this Thursday, September 25, and runs until 5 October.

Carbon Black gallery is run by Tim Bruce who is also co-director of Edmund Pearce gallery, where my recent solo exhibition, Burn, was held. Snapshot includes the work of some prominent photographers including Jacqueline Felstead, Chris Budgeon and Michael Corridore who have also shown at Edmund Pearce. 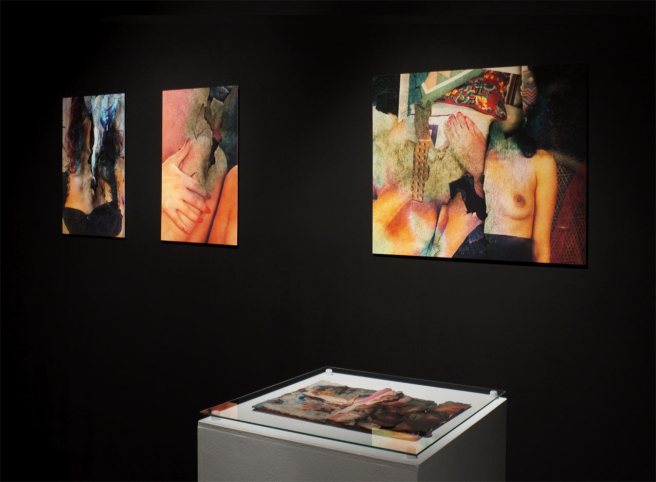 My new solo exhibition, Burn, has opened at Edmund Pearce gallery, Melbourne’s leading gallery of photography. This is my second showing there, after last year’s Chemistry of Chance with Greg Wayn.

The trashy content, the physical decay and the curious fact of its being set fire to made it an intriguing artefact. Was it burnt to destroy evidence of some private sin, or in a symbolic destruction of Woman?

Over the years I’ve photographed it several times trying to raise the decayed object to a higher plane. Eventually scanning produced an appealing softness and glow although that alone was not enough. Every specific area has been lightened or darkened and adjusted in contrast and saturation, so much that the images in the exhibition practically amount to paintings.

The Burn project is a further instalment in my work on entropy and disorder. I’m interested in these liminal states where decay is nearing the point of abstraction and new images and meanings arise out of the old. The tears and ruptures in Burn constitute a new image, equivalent in beauty to the bodies and faces, and forming a commentary on them.

It’s the arrow of time, entropy’s other name. All organised structures end in disorder: a magazine, a photograph, or a body. It is a melancholy thought that time is at work on the bodies represented in the magazine, itself now twenty years old. 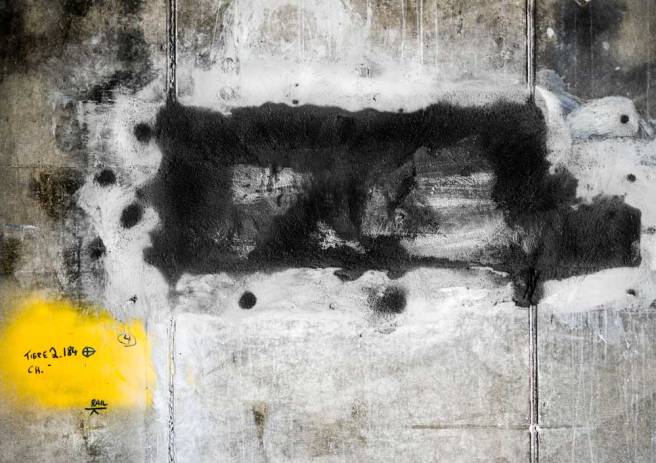 Edmund Pearce Gallery is showing the work of Melbourne photographer Christian Pearson. Called Industrial Graffiti, it’s close ups of industrial sites he covers in his commercial photography practice. This is a well worn path, but Pearson’s images are strong and well-designed, and they look good in their brown wooden frames on the gallery walls.

Return When Dry is a good example of this “abstract-but-realist” space of photography. The subject itself as banal and quotidian as a thing can be, marks made during construction, but it’s beautiful in its way, and it it does remind you of Rothko’s abstract paintings, maybe this one.

Edmund Pearce Gallery has an exhibition by New York photographer Phillip Toledano, a series called The Absent Portrait. They are large pigment prints derived from a very unusual source, supermarket packages from Iran. The censors in that repressive Islamic country deface packaging imports to rub out the illustrations of women. Each and every individual package – swimming toys, puzzles, underwear – everything with an image of a woman, is censored. This means blocking out the photograph with a texta or paintbrush. It’s appalling and funny at the same time.

Toledano, a nimble and enterprising conceptual artist, has got hold of some of these packages and converted the censors’ handiwork into artworks.

I remove the blacked-out figure from the surrounding image, and a transformation occurs. The censor becomes an artist. And the censored figure becomes a portrait. A portrait not of a person, but of absence. Of suppression. A portrait of a point of view. The censor, whose job it is to erase, becomes the person who makes us look.

Chemistry of Chance, my exhibition with Greg Wayn, has opened at Edmund Pearce gallery, the excellent photography gallery situated in the Nicholas building.

This project is a first experiment in abstract photography, a category I’ve always been suspicious of as it contradicts the mission of photography to record reality. But after reading about Concrete Photography, a separate category from ‘abstract’ which goes to the physical essence and ontology of the medium, I changed my mind. The exhibition is a series of pigment print enlargements of scanned black & white reject prints found in darkroom rubbish bins. This may disqualify it from a strict reading of ‘concrete’ because they are interpretations, one generation away from the originals, not the actual things. That was deliberate in our interpretation, we wanted them to be our own ‘art’.

They are intriguing images. As the sun sets on photo-chemical photography and it drifts into a twilight of cult use, its materials and processes acquire a certain romance. It’s a dimension that is not available to digital photography. 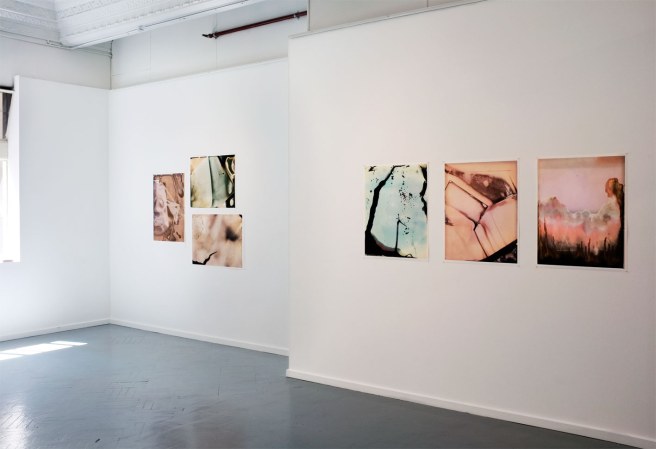 Chemistry of Chance, my exhibition with Greg Wayn, has an invitation card – it’s official, Edmund Pearce gallery has just released it. The gallery is notable for the beauty of its graphics, and in this case Greg’s found image graces the front. The gallery is in the famed Nicholas Building in Swanston St, and the opening is on Thursday February 14, 6-8pm.

I’m particularly pleased to be showing at this gallery because it has established itself as a major venue for new photography in only one short year. The quality and presentation has been high and the gallery has uncovered a lot of very good photographers previously unknown to me.

Chemistry of Chance is a two-person show derived from reject prints found in darkroom rubbish bins. Frustrated students would throw mistakes into the rubbish where they would “stew” in the dark, changing through the action of chemicals, water, air and time. They reveal the innate beauty and surprise of analogue photography’s photo-chemical materials.

Greg and I have scanned these darkroom mistakes, opening them up to make beautiful pigment prints that are un-cropped versions of the originals. 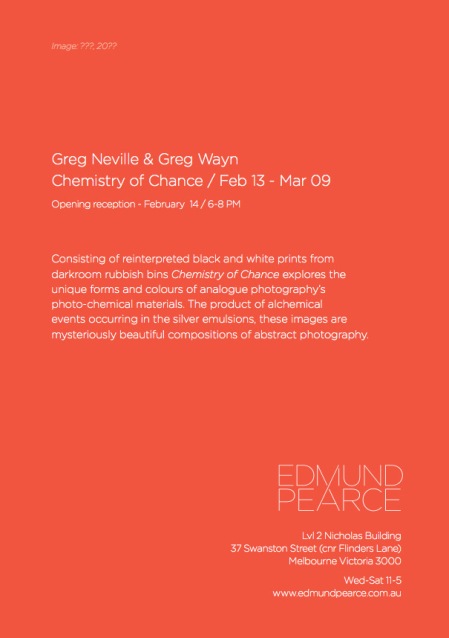 I’m working on an exhibition with Greg Wayn to open in mid-February at Edmund Pearce gallery.

The exhibition is called Chemistry of Chance and will be an exercise in Concrete photography, (subject of an earlier post). ‘Concrete’ is distinguished here from ‘abstract’. Concrete means real or actual, a thing that is itself and nothing more. Abstract is used for works that may appear non-representational but are derived – abstracted – from representational imagery or things in the world.

This work is non-representational, it has no referent in the world outside of itself. The images were generated by the chance interactions of developer chemicals, water and air, in the waste bins of college darkrooms. Impatient students, seeing disappointing results appearing in the developer, throw the dripping prints into the bins where they change in the darkness in alchemical ways.

The artist here is blind chance, no human intention is involved not even by the student. The weird and beautiful patterns that occur are only discovered at the end of the day when the weary teacher tidies the darkroom. By that time the print has dried, rendering any image permanent, I have some that are thirty years old.

The images are selected by the normal criteria of visual art, form, colour, balance etc. They are scanned and Photoshopped to bring out what was perceived in the original print. They are not cropped. 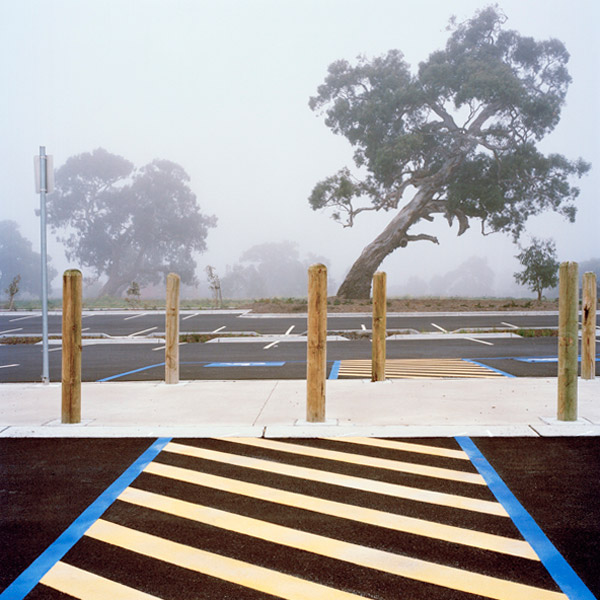 Edmund Pearce gallery has an exhibition by Dianna Wells of photographs that explore the urban fringe. There is a zone at the perimeter of every city where the suburbs lose their solidity and shade off into the rural. In a constantly growing metropolis that region is always moving further out, like a cancer. But for a time, it’s something you can pinpoint, and that’s what Wells does.

When driving out of Melbourne I’m always looking for ‘the edge’, the moment of transition from urban to country. On Edge documents the tension point between the old pastoral and the new urban, the change to the environment and the telling detail on the ground.

The terrific photograph above, an exemplary composition of geometric forms, shows the confrontation between ‘tar and cement’ and the mystical, eternal Australian bush. It’s an encounter between two time dimensions.

Dianna Wells is a graphic designer completing a Masters degree at Monash University. Her website is diannawellsdesign.com