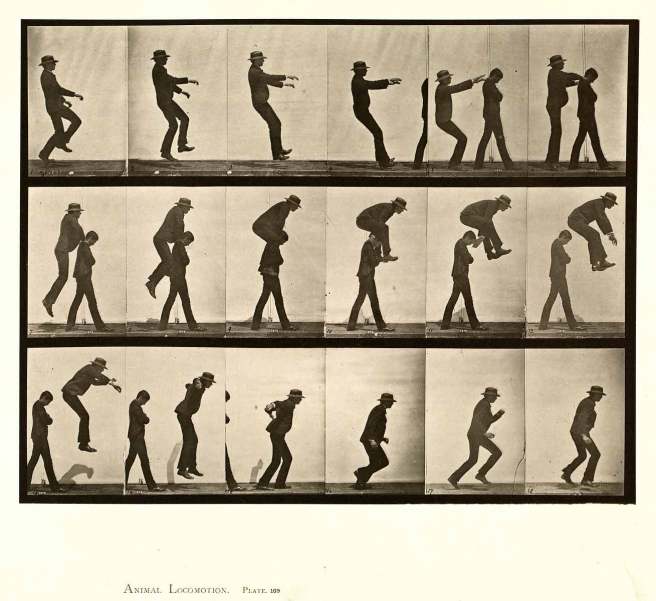 The Eadweard Muybridge Online Archive is presenting all the images in Animal Locomotion and it’s something to see. Somehow this work never goes out of date, even after 127 years.

Muybridge’s photographs of human and animal movement in Animal Locomotion came like an earthquake in the late 19th century. It effected not only the photographic world, but all the visual arts. For example, painters could see what movement really looks like, frozen. The Impressionist Degas for one incorporated the horse studies into his pictures of horse racing.

As Eadweard Muybridge took his work on the road, presenting magic lantern shows to art and science academies and to the general public, he planted the seed of what was to become cinema. He had already invented the Zoöpraxiscope, a projector for showing a moving picture version of his still photographs. This was the first movie projector, long before the Lumiére Brothers first projected strips of movie film in public, in 1896.

In 1887 he met Thomas Edison and they discussed the possibility of using the Zoöpraxiscope with Edison’s new phonograph invention. The idea was to project moving pictures with synchronised sound, amazing when you consider it wasn’t until 1927 and The Jazz Singer before movies with sound arrived in cinemas. So much had to happen before then.

In 1891 Edison built a Kinetescope, a machine for running a long strip of movie film past a peep-hole viewer. It caught on in penny arcades, then led on to the Niclelodeons the cheap (nickel) storefront movie houses that established cinema as we now know it.

Muybridge didn’t invent all this, but he did help to set it in motion.