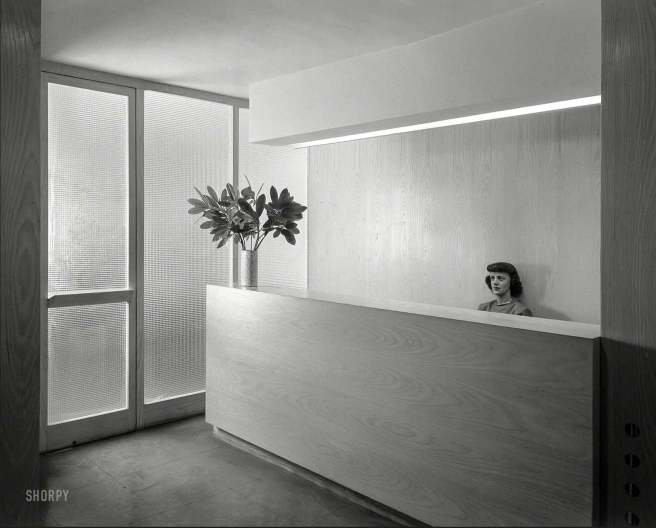 This unsettling photograph has appeared on Shorpy.com, the online archive of vintage photographs. It was taken in 1948 for the office of Russel Wright, the esteemed mid-century American designer. His modern industrial design was not unlike that of Charles and Ray Eames, organic, playful and contemporary. So it’s a mystery why such a sterile image was deemed suitable to promote the business.

It has such a rare blankness it’s a treasure, a perfect depiction of 20th century urban alienation. Presumably these qualities were not intended. It was taken by Gottscho-Schleisner, Inc, the architectural photography studio whose work often achieved a high degree of clarity and technical perfection. No doubt the photographer was just trying to do a neat job, and asked the secretary to keep very still during the exposure.

Whatever the explanation, I’m sure one day it will appear on the cover of George Orwell’s 1984 or some other dystopian novel. After all, the photograph  was taken in 1948, the year Orwell wrote his novel, naming it by simply re-arranging the numbers of the year.