This prosaic postcard records a street in Northern France but it’s difficult to see what purpose it served. I bought it because of the intriguing shadow of the photographer in the foreground, but the image is unexciting and a strange choice for a postcard. Here is an investigation, without a conclusion.

The postcard is printed photographically rather than through offset or lithography. In other words it’s a silver gelatin print with printed text on the back, and being a darkroom print it would have been made in a short run. It’s easy to see that an ordinary view of a street would not require a large print run.

The street is unexceptional, small homes with a few businesses. You can see the sign for a newsagent to the right: Librairie, Papeterie. The town of Coudekerque-Branche is part of Dunkirk, on the English Channel. The name is partly Flemish meaning bend-church-branch, perhaps once a church where a river bends and branches?  Dunkirk (Flemish for dune-church) is a port in northern France and a landing place for UK ferries. It was the site of the disastrous retreat by British soldiers at the start of World War II. Could there some connection with this postcard?

The photograph is much older than 1940 when that retreat took place. The absence of cars, advertising, lamp posts or other signs of modern life, plus the size and shape of the camera, suggests the period of 1890-1920. There are images of Atget standing alongside his similar-shaped camera during that period.

The street is named after Jules Guesde, a socialist politician and later government minister during during World War I. Apparently, Marx did not approve of Guesde or his colleagues, famously stating “if they are Marxists, then I myself am not a Marxist”. It seems unlikely, but perhaps Guesde is the reason for the photograph and for it appearing on a postcard – streets throughout the town are named after famous people, Edison, Pasteur etc. so maybe there was a series of such cards on sale? 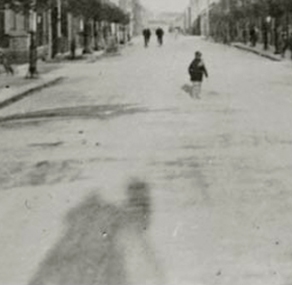 The sun is very low casting the long shadow of the photographer. Since in reality the street runs East-West and the view is towards the East, the sun behind the photographer is the setting sun. According to SunCalc, the time is about 4pm probably around early March, ie late winter/early spring which would explain the heavy overcoat on the photographer.

That’s about all we have. The street is almost unchanged today; the Google Street View camera has driven along a hundred or so years later and photographed it from much the same place as our photographer. Was it only the second time that anyone bothered to shoot this ordinary street?

You can see how the earlier view distorts the breadth of the street, and how cars now ruin what charm the street might have.

Here is the Google Street View photo altered to look like the original image. It is hard to determine why the old version feels so much nicer than the new. Is it nostalgia for a lost time we wish for? Do the cars bring us abruptly back to present day reality? Photography is a time machine but I still don’t understand how it works on us.