Abstract photography is a complicated idea. The medium is so closely identified with visual reality that any attempt to move away from it seems contrary to it’s innate purpose.

It’s featured in the exhibition Photographic Abstractions at the Monash Gallery. Different ways into abstraction are presented, and it’s a useful map of the territory as practiced in Australia.

A dictionary definition describes abstract as “having no reference to material objects or specific examples”. That would seem to make it difficult for photography, but the word’s Latin root means “drawing away from” or “removed”.  Abstract art “drew away” from figurative art in the early 20th century when Kandinsky, Delauney and others painted more and more abstractly, arriving at pure abstraction in 1910. But their abstract art developed out of their figurative art.

On that basis, a lot of photography can be described as abstract because it moves away from straight recording of the visual world, into pattern, line, blur etc. The David Moore collage above is comprised of sliced up colour prints of a road surface and sky, but it’s the elegant geometric composition that you see. 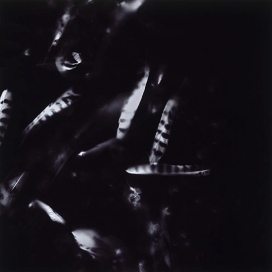 Harry Nankin and Susan Purdey have photograms on display, but surely this technique is the opposite of abstract? An object makes an image of itself on photographic paper without the mediation of a lens or film. It’s a 1:1 relationship in scale and touch, and that sounds like realism to me. Indeed, Harry once told me the reason he moved away from lens-based photography of nature was to get nature itself to make the pictures. But the images are not realistic in the way a colour photograph is, they are more like charcoal drawings.

Robert Owen‘s Endings are perhaps closer to the abstract ideal as they are pure material with no indexical links to an object. They are Kodachrome film ends enlarged into colour prints that are just fields of colour. One of them was from a roll of film (coincidentally) shot on the day Mark Rothko died, and the image has a distinct resemblance to a Rothko abstract painting.

Perhaps there’s a problem in classing this image as abstract – purely abstract. If it was chosen for its resemblance to a Rothko painting then there is a degree of representation in it after all, even if accidental. It is certainly abstract visually, but in resembling something out in the world doesn’t it fulfill photography’s descriptive purpose? 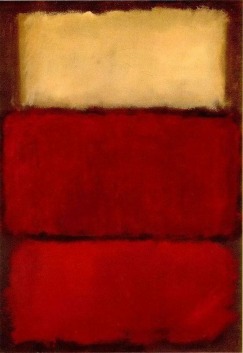