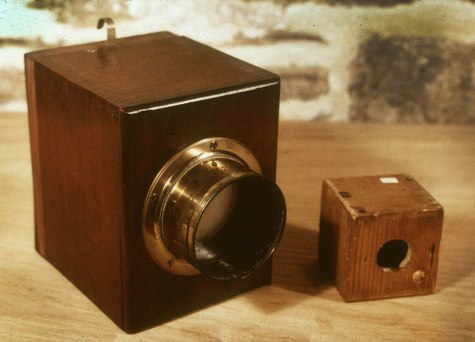 When Henry Fox Talbot was inventing photography during the 1830s and       40s he needed some cameras to work with. “Legend has it that the simple little wooden cameras were made by the Lacock village carpenter, Joseph Foden. Talbot’s earliest ones looked like the simple little box on the right, about the size of a good Wiltshire apple.”  (Larry Scharf)

For bigger and better cameras like the one on the left, he turned to London instrument maker Andrew Ross, and when these arrived the bill was up to £7 for each one. This doesn’t sound too much for a small wooden box with a simple lens, but it’s about £650 in today’s money, about AU$1000, quite an expensive toy. Still, Talbot was a wealthy man and it would not have hurt.

When later his daughter Matilda got married he bestowed on her a gift of £5000 – that would certainly have hurt. That sum was almost equal to two years expenditure maintaining the abbey, his family, servants, gardener, carriages, horses, plus taxes, insurance and medical expenses.  It is roughly equal to a million dollars in today’s money so it was a very handsome gift (which of course his daughter did not receive since the law made it the husband’s property).

But now let’s consider this wealth from the opposite end – from the perspective of one of Talbot’s servants. The Talbot household kept nine servants and in the mid-19th century servants with low status would have received £10-20 per year (admittedly with room and board supplied). The lowest in the servant pecking order was the scullery maid, basically a kitchen labourer, who worked on the heaviest jobs in the downstairs kitchen. She would work about 12 hours a day and probably 362 days per year as there was no annual leave.

So his daughter, who never had a job, received £5000, and a servant who worked over 4000 hours in a year received £10. Talbot’s £7 camera would have taken that scullery maid almost till September to pay off and represent 2800 hours of hard and dirty labour.