This quaint cabinet portrait is by the studio of Stewart & Co, probably dating from the 1880s. It is a sentimental portrayal of Victorian femininity, the sweetness enhanced by the purplish tinge from the albumen emulsion. It is fine portrait of an unmarried young woman and would have meant a lot to her loved ones at the time. Who was she and what purpose did the photograph serve? Who knows? It has no identifying name on it and I bought in a secondhand store for $6. We are all destined for such anonymity and oblivion!

Cabinet portraits were a commercial format that followed on from the immensely popular but smaller Carte-de-Visite of the 1860s. Made of a silver-albumen contact print glued onto an elaborately engraved card, they were 41/2 x 61/2 inches, so-named, according to Wikipedia, because they were large enough to be displayed in a cabinet.

Robert Stewart was a commercial photographer with studios in Sydney and Melbourne at various locations from 1867 on. Stewart and Co. occupied studios in Bourke Street Melbourne where this portrait was made. 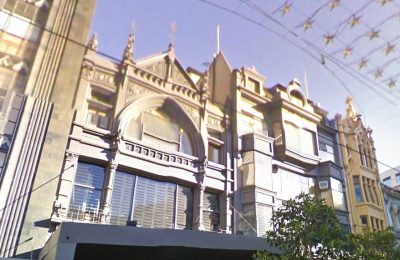 The present building of 1902 (which Darrods department store occupied) replaced the earlier building at this address which Stewart’s business must have occupied.