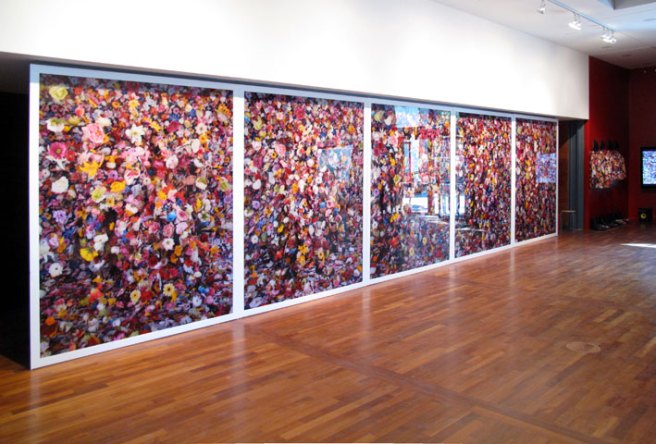 Artist Lee Yongbaek is representing Korea at the Venice Biennale with, amongst other things, a brilliant installation called Angel Soldier. This is a series of large colour photographs with related video and objects. It is an elaborate anti-war statement, understandable coming from South Korea with the most deranged country on earth on it’s border. An illusion is created in the dense screen of flowers, through which camouflaged figures can be seen.

Venice Biennale: Nine microfiche machines in a darkened room. The machines are automated and retrieve hundreds of press photographs from the 20th century. The screens displays a photograph for a moment before moving on to the next retrieval. The busy machines clatter in their work. 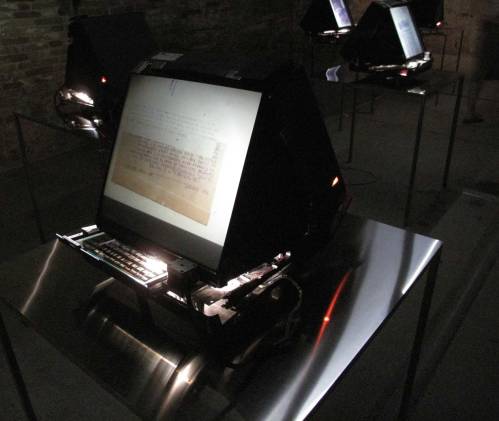 When they stop you see a photograph of some topical moment from the 20th century. But you see the back of the photograph, not the image itself. You see the press agency’s description of the photograph on the other side, the caption, the copyright data, the credit. You read, you don’t look.

It’s history through captions, the victory of text over image. The captions attempt to explain the missing images, and you try to imagine what they might look like. Photography is dependent on the written word in a ways that painting or drawing is not. It’s almost always accompanied by text of some sort, titles, descriptions, critiques, as if the purely visual is unreliable.

The project is about photography, even though no photographs are directly seen. For a start, the backs of these photographs are now photographs themselves and they have their own beauty: the old typewriter fonts, the mysterious scribbles, the fading paper.

It’s also about photography’s relation to the archive, the record of history and knowledge stored in countless photographs in museums, libraries, government departments. The room of microfiche machines is like a busy office, searching relentlessly through the files, it’s a parody of the bureaucratic process.

Look at these still shots below and see if you can imagine the picture on the other side:

DIRECTS ADVANCED STUDY Dr. J. Robert Oppenheimer. the new director of the Institute for Advanced Study at Princeton, N.J., is shown here in front of a blackboard full of mathematical formulas at the institute. Dr. Oppenheimer, a professor of mathematical physics, served as wartime director of the Los Alamos laboratories of the Manhattan Project when it developed and produced the first atomic bomb. 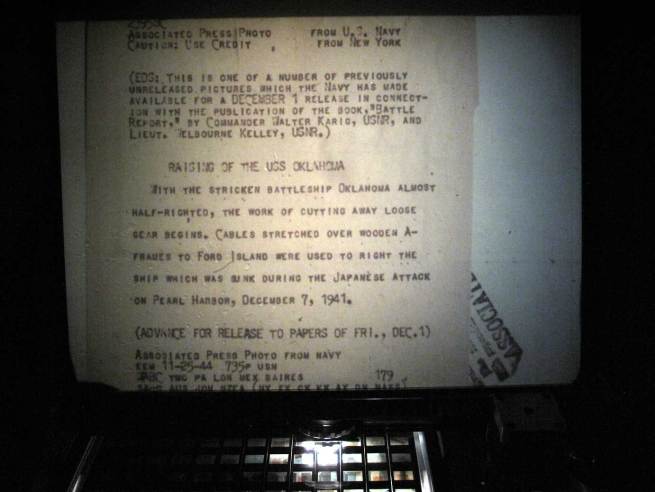 RAISING OF THE USS OKLAHAMA  With the stricken battleship Oklahoma almost half-righted, the work of cutting away loose gear begins. Cables stretched over wooden A-frames to Ford Island were used to right the ship which was sunk during the Japanese attack on Pearl Harbour, December 7, 1941

Click here to see Elisabetta Benassi at the Biennale, with her installation: www.youtube.com/watch?v=GQ8cem-CX_Q 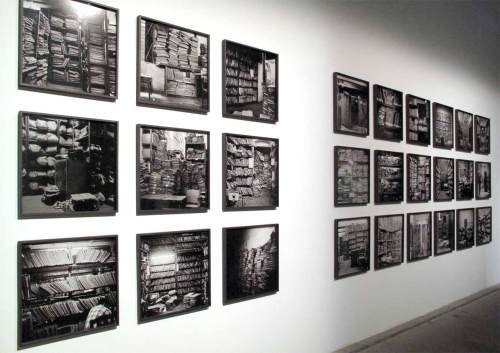 There is something intrinsic to photography, compared to other visual media, that an idea needs elaboration, repetition and variation to make its point. Paintings and drawings can stand alone, their pictorial space is plastic enough to allow complexity and multiplicity, and an artist’s idea can be stated in one instance. The space of a photograph is different, inherently smaller due to the tiny negative or digital sensor and enlargements are usually modest in size.

The monocular eye of the lens sees only the world of things and resists larger meanings – narrative, allegory and the like. But when variations can be shown, the re-statement and reiteration of an idea makes more complete communication possible, ideas can be teased out and explored, given breathing space. So photographs are often displayed in books, series, sequences, clusters and grids. The Venice Biennale this year is showing a lot of photography and it’s noticeable what a large proportion is in grids.

The tight geometry of the grid acts as a foil to the multiplicity of forms within the photographs. It contains them so there can often be a pleasing tension where the forms want to burst out into disorder but are restrained, for our inspection – look at the Birdhead grid above. Since time is a large subject in photography, images taken over time can be presented in a grid of related moments. And that other common subject in photography, typologies, is ideally suited to display in grids, where comparison of forms is easy – look at the works above by Antonio Biassiucci and Dayanita Singh.

At the Biennale, where the art on display is typically so big, small works are at a disadvantage. Perhaps that’s why small photographs where always shown in large numbers. The sheer scale of twenty or fifty photographs in a wall grid is protection against being overlooked. Whatever the inherent quality of the work on show, and I had my doubts about some of it, at least you couldn’t miss it.