The Conformist was a major European film in 1969 and established a new standard and style for cinematography. It was directed by Bernardo Bertolucci whose next film was Last Tango in Paris. Set in Fascist-era Italy it followed the story of Marcello Clerici as he marries into a stuffy bourgeois family and plots the political assassination of his former professor.

The cinematographer was Vittorio Storaro, who later won an Oscar for Apocalypse Now. His influence on subsequent film was felt in Hollywood where the new generation of directors, Coppola, Scorcese and others, absorbed his lessons on the editorial capacities of the camera. Storaro is not just a recorder of events but a full creative partner, an independent author of the film alongside the director Bertolucci.

For example, in the image above notice how the frame is partitioned by the wall behind the actors, with the each side matched by their costumes. Colour is character: dark and complex for Clerici, light and simple for his fiancee Giulia.

To me making a film is like resolving a conflict between light and dark, cold and warmth, blue and orange or other contrasting colours. There should be a sense of energy, or change of movement. A sense that time is going on – light becomes night, which reverts to morning. Life becomes death. (Vittorio Storaro) 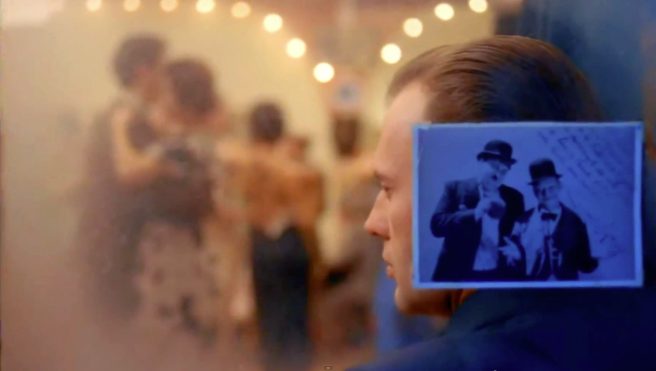