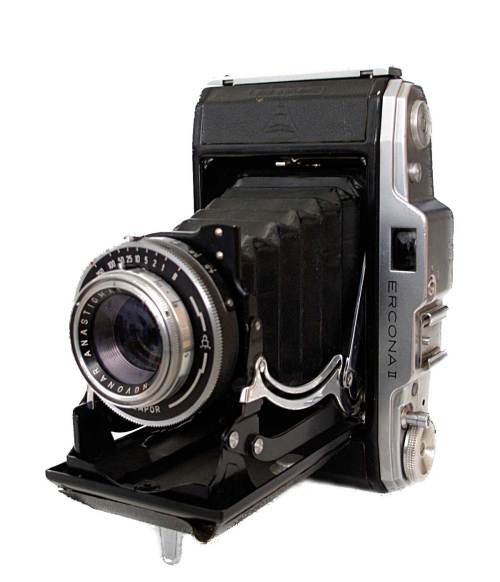 Looking back at all the cameras I’ve had, I counted twenty two that have meant something to me, or that I used in some significant way. Photographers love cameras, I mean they’re in love with them, it’s a feeling that non-photographers don’t understand. So I decided to research these twenty two, to find out what it was all about, starting with the most recent one.

The Ercona is a 1950s fold-up bellows camera which weighs two pounds (765 grams) and takes a 6×9 cm negative. The lens is an f4.5 110mm Novonar. It has a Tempor shutter with all speeds up to 1/250th. There is no lightmeter and no rangefinder, focussing is by educated guess.

The 6×9 cm format is the sweet spot in roll film photography. Ideal for landscape and urban subjects, you don’t need to crop down from a square negative thus losing the advantage of its size. It has the same shape as 35mm – 1:1.5  – so it feels familiar when composing. And the negative is large enough that you don’t really need to enlarge, a contact print can look very fine – see below.

According to a post on apug.org “the Ercona is pretty much a post-war Ikonta 6X9 of immediate pre-war design under a different name, when Zeiss Ikon Dresden found itself on the wrong side of the political railroad track.” In other words, it’s East German and has the allure of history.

Zeiss was part of the East German conglomerate Pentacon that made the very successful Praktica SLRs. Wikipedia has a sad tale that would have been repeated all over the former GDR in the 1990s …

It was deemed that the company was grossly inefficient, employing six thousand staff when it could have sufficed with one thousand, and selling its cameras at a loss. Liquidation began on October 2, 1990 (one day before official reunification), and production ceased on June 30, 1991. By then it had shed nearly three thousand employees to retain a total of 3331 – the next day all but 232 were laid off.

This photograph, made with the Ercona, is a handcoloured black & white darkroom contact print, ie the image area is 6×9 cm. The camera is from the collection of my friend and colleague Greg Wayn.